Time Out: The Evolution From Media To Markets Case Solution & Answer

Home » Case Study Analysis Solutions » Time Out: The Evolution From Media To Markets

Time Out: The Evolution From Media To Markets Case Solution

Time Out Group, over the span of five decades, has reached many heights. The group started its business as a counterculture entertainment, and lifestyle publication and today it is capturing media attention by running a market full of nightlife, decadent cuisines, arts, culture, and much more. The brand that started its journey from the kitchen counter in London is now ruling in hundreds of cities around the globe.

Chief Executive Officer of the group: Mr. Julio Bruno and his team changed the strategic direction of the group due to the rise of the internet culture. The management of the Time Out group had to rethink the content they were putting out in front of their customers. The team collectively decided to take the digital route in order to make the Time Out Group successful in the future, and quickly introduced the digital version of its publication across the globe.The Time Out Market was launched after the company suffered from an annual loss-in the revenue generated from its publications. The company’s management decided to maintain its significance and overcome the revenue loss by moving into a new strategic direction. Initially, total of six cities hosted the Time Out Market. The market is a collection of modern style food halls, event space, multiple restaurants, and decadent food etc.

Time Out is a self-proclaimed “platform skeptic” brand. This critical strategic move to start a new market venture by the CEO of Time Out made history. This unique transition is marked in history as a collaboration of physical and digital businesses and is termed as phyigital”.

Introduction to Time Out Group

The Time Out Group was established by a 21-year-old founder named “Tony Elliott”. Tony was a young and energetic university student who utilized his summer break to lay the foundation of Time Out, using the money he received as a present on his birthday. Tony published a one-sheet flyer/pamphlet of Time Out initially. He used his mother’s small and humble kitchen counter to run this business. Tony wanted to create an experience for his customers. He wanted to combine and catalog all the finest possible things residents of London or tourists can do, such as: theater, music, film, or arts, etc. He wanted people to know London, inside and out. 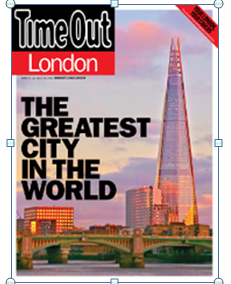 Soon Time Out became the voice of Londoners. It proved itself as a platform that published interesting and engaging content. This small project that started from a humble kitchen counter soon grew immensely not only in scope but also in profile.

Time out interviewed some of the most iconic stars of the era, such as: Jack Nicholson, Andy Warhol, etc. Not only that but the magazine also managed to hire some of the best editors available. Interviewing icons and recruiting guest editors etc. were among the best strategies of the Time Group and these successful strategies led the magazine to secure its position in the most respected publications to have ever existed in history.The magazine soon crossed borders and made a name for itself in the international market as well.

In the year 1995, Time Group adopted the use of internet technology and quickly launched its website. The magazine is available in print version in around 40 cities only, whereas the rest of the world can read the publication digitally using Time Out’s website. Time Out attracts about 23.8 million unique visitors each month on its website and the social media accounts of the group contain about 32 million followers in total.

The magazine group saw these  aforementioned characteristics as crucial to ensure that the publication was open and inviting and contains something for people of different age groups, or mindsets, etc.

Time Outsmarted as a media company and now they also work as owners and/or operators of food and social markets. In 2015 after the group suffered an annual loss, the management of Time Out decided it was time to diversify the company’s revenue base. Hence, Time Out Market was launched.

The market consists of remarkable multiple food halls,beautifully designed shared dining sections, and a huge space for public or corporate events, etc. All of this is designed with the intention of bringing what the Time Out publication mentioned come to life. The management of the company wanted to provide their customers with an unimaginable experience in which the customers could immerse themselves and enjoy the music, food, culture, and tremendous nightlife.After the launch of the Time Out Market, the company was on a roller coaster ride. The chief executive officer of Time Out Group Mr. Bruno and his team were on a mission to recover from the annual loss incurred by the company’s publication and to maintain the new market venture.

‘OH, A CAREER-MINDED WOMAN?’: A CASE STUDY ON GENDER DISCRIMINATION Telegraph Media Group: The Newspaper Is Dead, Long Live the… (A), Change, a Business and Leadership Imperative

Telegraph Media Group: The Newspaper Is Dead, Long Live the… (E), Change – A Work in Progress

The Nation Media Group (B): Launching the Business Daily