Impact on financial institutions and banks

The impact of subprime mortgage crisis on the banks was huge since banks’ performance, profitability, liquidity, growth, and assets performed worst. Since, the banks, and stock exchange markets were affectedly in every corner. Three large investment banks in the United States went bankrupt Lehman Brothers, Bear Stearns, and Merrill Lynch, and two other banks turned to be commercial. Furthermore, it can be determined that there were many complications in the market due to increased complexities in the market because of securitization.

Also, financial crisis refers to the sudden large decline in assets value. So, assets held by the banks lost value in the market, and on the other hand borrowers defaulted, and investors’ concern increased. The complete chain disturbed, and banks defaulted on paying to investment banks, and special purpose vehicle failed to pay investors. Besides, it can be determined that hedge funds have also suffered worst. Because, hedge fund companies are always trying to outperform the market.

So, they involve in the derivatives, options, and contract such as credit default swap which is just like betting on failure of securities in the market to mitigate the downside of risks. Furthermore, it can be determined that banks, financial institutions faced worst situations during the crisis. While, real estate bubble had burst, and contributed global financial crisis which affected whole world, specially banks, and stock exchange markets that performed worst, or crashed.

Critical assessment of resolution of the crises

The recession of December 2007 to June 2009 due to the United States subprime mortgage banking emergency nationwide. This has impacted other countries to the extent as well because of the intertwined economy. America face crises due to its exports; investments are disturbed and contagion to foreign banks as they owned a lot of American assets. The crisis was met due to the significant distribution of credit to consumer and business. Commentator blame responsible for this recession to the financial institution who provide excessive financing to market, credit agencies, consumer and in particular government for ineffectual housing policy and not intervening to prevent the bankruptcy of Lehman Brothers  which was the largest bankruptcy filed in the history of United States  holding over six hundred billions of assets. Lehman Brothers were deeply involved in mortgage origination although it has a high leverage structure that values of 5% decline can wipe all its capital consisting of approximately twenty-two billion only which becomes the reason for the bankruptcy as well.

Banking sector had provided excellent loan facility in each aspect and were available to minor and lower income holder as well. The majority of people in the United States have a high-risk attitude with the lavish lifestyle comparatively with the United Kingdom and some other countries. Furthermore, inter bank clashes to earn more return lead them grant a loan to wipe on pending of the other, having increased credit limit but with the higher interest rate to minor and lower income holder who have already delinquented.

Monetary policy is the process through which financial authority controls the supply of the money in the market and target in with inflation and interest rates. The unfitting monetary policy was also one of the reasons assessed in the crises interest rates that are low till 2004 but then rise steadily shows decision of interest rate by federal reserves .i.e. monetary authority. 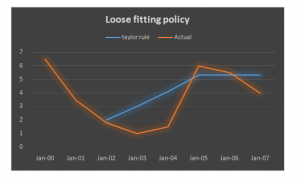 The blue line in (figure 1) label as the Taylorrulei.e.historical policy, by many economists that works well to smooth en version of interest rates plugging inflation and GDP as well. Actual interest rate results in fall well below the suggested old policy providing an empirical measure as too “loose fitting’. Unusual deviation of real interest rates from Taylor rule which clearly indicates that there was monetary excess during housing boom period.

The recession mainly occurred due to an excessive subprime mortgage which made collapse the housing bubble.  Government push people with lower income into home ownership. For loan was granted by pledging the same asset i.e. house. The policy was enacted in 2006 when housing prices were stable. High expansion of household debt with financing offering a high rate of return on the mortgage but lower credit quality causes a default. The prices of home started to decline due to the reason, it was viable for all lower income holders as well. Decay in pledged house hold item due to price-demand effect makes difficult for borrowers to refinance their loans. In 2007 home in debt reached an unusual percentage of 127% debt to disposable personal income and financial market fronting sizable losses resulted further in bankruptcy of mortgage lenders.

The decline in housing bubble influenced borrower to default, as required payment was more than the value of pledged house. The financial market continues to worsen as financial firm facing default in interest payments and writing down subprime-related securities. Thus made global investor unwilling to further invest in mortgage base securities.

Credit rating agency which rate debt instrument through evaluation of credit risk has a substantial share to be responsible for subprime mortgage crises leading great recession. Rating agencies had also given their highest rating of “triple-A” to this pool of debt making it the safest security to invest where pension fund and money market which are very regulated allowed also to be injected while in 2010 these triple-A securities amounted above 100 billion were downgraded to junk status……………………..

This is just a sample partial case solution. Please place the order on the website to order your own originally done case solution

Where’s the Fine Print? Advertising and the Mortgage Market Crisis