Piriformis syndrome (PS) is a disorder in intramuscular produced by the compression and spasm of the muscle of Piriformis. The Piriformis muscle is a flat, spindle-shaped muscle present at the buttock region. The spasm caused in the muscle irritates the nearby sciatic nerve and causes pain. The patient suffering from this syndrome may feel pain at the bottom of the back and legs. Study has shown that this syndrome is more likely to be found in women than in man. This syndrome can be diagnosed through several techniques such as MR-imaging, Medical history, and physical tests. Once the syndrome has been detected, the patient undergoes through several treatment procedures which ultimately depend upon the patient’s condition. The possible treatment procedures for this syndrome may include exercise, physical therapy, exercise, injections, and surgery. The period for each of the therapy may vary. However, it has been shown that physical therapy along with injections has more efficient and promising results in treatment procedures than surgery. The patients are suggested to visit experienced health professionals to avoid any complications.

PS is a medical constrain that develops from the Piriformis muscle. It is a standard, belt-like muscle arranged in sequence by the sciatic nerve present in the pelvic region. This muscle is significant for lower body growth because it measures the hip joint and turns the thigh apart from the body. This allows us to move, to shift the weight from two foots, and to sustain the balance. It is widely used in sports including lifting and rotating thighs. In general, these muscles are very important in lower extremity movements and motions.

The sciatic nerve is broad and long in the body. It crosses near or close by the Piriformis muscle. It goes at the bottom of the back and leg and finally goes down into the inferior arteries ending at the feet.

PS is a rare intramuscular disorder caused by the compaction of the sciatic nerve. This condition makes the person feels uncomfortable in walking and in sitting. It causes pain in the back when sitting or sleeps in one position for too long. However, this condition is painful but can be treated through different therapies and medications. The treatment procedure and duration may vary from the person to person. In some cases, this condition can be resolved rapidly whereas, in some, it takes a long time for rehabilitation for treatment and pain inhibition.(ZF, 2018)

This clinical study was conducted by Jason C. Tonley, This study shows the effects of Piriformis syndrome in a 30-year-old male patient. The patient was enduring the pain in right buttock and posterior thigh for the past 2 years. After taking the strength assessment of a patient, it has been found that the patient has a deficiency of the right hip abductor and external rotator muscles.

After following the intervention, It has been reported that the patient shows 0/10 pain with all the activities. However, there is a decrease in the initial lower extremity functional scale questionnaire. It has also been found that there is an improvement in the kinematics of hip adduction and internal rotation during the step-down task and the patient shows positive results. (Tonley, 2010)

A clinical study was suggested by Sharon M.H.Tsangamong Twenty healthy females Aged from (18.0-23.0). These females were conscripted from the university. In the wake of completing a few testing, these women were tested with lower appendage and back torment. After performing the test, 4 of the 20 females were having mild pain intensity levels, whereas 12 were classified as moderate-intensity level and only 4 were classified as vigorous pain intensity level based on the International physical activity Questionnaire scale.The patients were asked to perform 8 hip exercises that are Hip extension in prone lying and 4-point kneeling, single leg bridging, single leg sit-to-stand, Hip Abduction (side-lying), clam1, clam 2, and pelvic drop. These 8 exercises were performed on the dominant leg along with rest in between. The hip exercise was performed in two rounds. In the first round, the participants were performed naturally without the contraction of abdominal muscles, whereas the second round was performed with the contraction of abdominal muscle. These exercises such as hip exercise have a positive impact surrounding the Piriformis muscle and are useful in decreasing pain. (M.H.Tsang, 2018)

In a randomized control trial by Waqar Ahmed Khan, The comparison between the effectiveness of hydrotherapy and manual therapy was conducted. This study was conducted at the physical therapy department and DHQ hospital. In this study, 50 patients were divided into 2 groups. The first group consists of 25 patients which had gone through the Electro therapy treatment (such as TENS, Short wave di-therm, etc.) whereas the other 25 patients were gone through the manual therapy treatment that is therapeutic exercises, etc. These groups had regular physical therapy sessions for 3 weeks. After the constant 3 weeks of exercises, the progress of a patient was measured based on the Oswestry scale. It has been shown that patient’s which had the physical therapy exercise has better results and positive outcomes than the patient’s had elector therapy treatment.(Awan, 2012)

In this case study by Adem PARLAK1, A 41-year-old patient (male) was admitted to the clinic with constant outgoing pain in the lower back and left hip for approx. 6 months. After going into this matter, it has been shown that the patient had no medical history of body pain, fatigue, weakness of muscles, dryness of mouth and sores in the mouth and genital area, abdominal pain, etc. After examining the patient’s physician, it has been shown that the Schober test for a patient was evaluated as negative whereas the Laseque testwas positive and FABER (flexion, abduction, and external rotation) was evaluated as partially positive. It has been shown that there is a slight increase of Piriformis left muscle as compared to the right one. It has been found that there is a constant decrease in back pain and pain by performing a warm sitz bath, Hip adduction, and strengthening exercises.

Therapeutic exercise has a hugely positive effect on the treatment of Piriformis syndrome all over the world. It has been confronted by several studies that therapeutic exercise has a positive effect on the patient’s life. The patient suffering from lower back and hip pain due to Piriformis syndrome have seemed to be decreased by doing several physical exercises. However, the effect of the period of these exercises may vary from person to person.

Several exercises can help decrease sciatic pain such as side clam, Extension of the hip, supine side stretch and different buttock exercises. 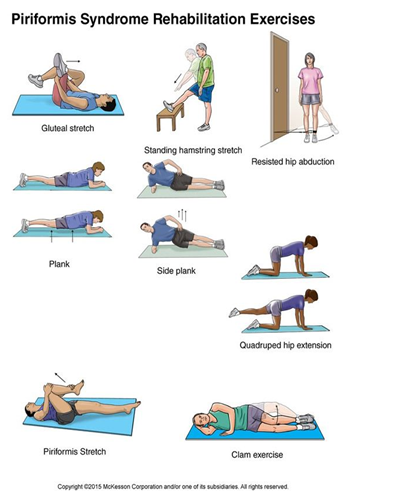 This study was conducted to compare the efficacy of muscle energy and stretching techniques with patients suffering from PS. According to this study, 30 females aged from 30 to 55 were determined with PS. These 30 females were divided into two equal groups. Group A was subjected to muscle energy technique whereas group 2 undergoes through stretching therapy technique. The duration of therapy was about 10-15 mins/sessions which lasts for approx. two weeks. After two weeks of consecutive sessions, the patients were asked to give the follow-up based upon VAS and LEFS scale. It has been found that both groups have slight differences in results. Along with these, both groups have been subjected to receive short wave di-thermy. On comparing the mean results of group A and B based on VAS and LEFS scores, Group A has shown significant results as compared to group B. (vijayan, 2019)

This study is suggested to find the efficacy of Myo-fascial technique over stretching technique. 20 participants (female) aged from 19 to 25 years have participated in this study on basis of criteria. The subjects were randomly provided my official and stretching techniques twice a week for approximately four weeks. Before each session, the patients were asked to check their pain score through different assessment techniques. After checking the results, it has been found that there are no significant effects of released as compared to stretching exercise. (Sarmitha, 2020)

These two groups were differentiated based on thickness, volume, and increment/decrement in fatty infiltration. After treating the patients of group 1 with injections, it has been found that the treated patients have shown a significant reduction in thickness, volume, and a slight increment in fatty infiltration whereas the untreated patient was discovered with no significant differences. It has additionally been found that BTinfusions have great impacts in treating the patients and the agony level was discovered to be hindered. (M.Al-Al-Shaikh, 2015)………………………..

Case Study Answers That You Should Avoid