Sponsor Lenders finance the company through the bank debt because of low interest rates than the subordinated debt however;it has more heavy covenants and limitations. The bank debt requires full payback. Bank debt is of two amounts term loan A and term loan B. The two are different because of the repayment methods. 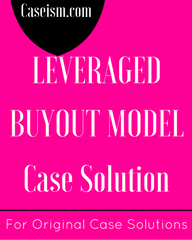 The other way of financing the leveraged buyout is high yield notes, seller notes and common equity.
The IRR of the leveraged buyout of sponsor lender is 58%, which shows that the value of the buyout will be zero on 58% and it is a positive step from the company to purchase the company. The IRR of the buyout also shows that the seller will be comfortable that the financing risk is minimal by providing the committed financing. However, comparing the buyout with the recent buyout will also give a good idea on the feasibility of the buyout.

Mezzanine financing can be completed through variety of different structures based on the objectives of the transaction and the existing capital structure in place at the company. Mezzanine lenders look for certain return, which can come from different sources.

The interest on the financing is cash based on the financing outstanding balance and the interest rate can be fixed or can fluctuate. PIK interest is a periodic form of payment where interest payment isn’t paid in cash but the principal amount increases by the amount of interest.

Sponsors use mezzanine capital in a leveraged buyout to reduce the amount of capital invested because the lenders have typically lower target cost of capital than the private equity investors.

The IRR for Mezzanine Lenders is 14.44% which is less than the IRR of sponsor lenders. It can be due to the high interest risk in the mezzanine financing. However, the funding can be used to fund a growth opportunity.