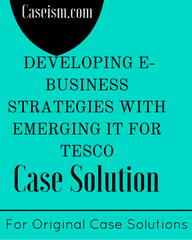 Furthermore, the main element, which allowed the company to pursue a robust growth, is that the company has a core focus on the UK market, due to its significant potential. The company operates its business in more than 1800 stores in the entire UK market, which serves approximately 26 million customers in UK with more than 11 million household customers. In addition to this, 75% of the overall group sales of the company arrives from the UK market.

The second element of the companyâ€™s strategy, which has allowed the company to pursue rapid growth, is that the company has also expanded its operation internationally with over 12 European and Asian markets outside UK.

The third and fourth element of the companyâ€™s strategy is selling non-food items which has accounted for approximately 6.8 billion pounds in UK alone. In addition to this, the company has also offered other retailing services to its customers, which include Tesco personal finance, Tesco.net as well as Tesco telecom which have increased the overall revenue of the company.

In early 2000, the top management of Tesco identified a massive potential in the online retailing industry. Keeping this in view, the company started shifting its focus from conventional brick and mortar retailing towards online retailing.

In this system, the customers are required to place their orders online through websites of their desired products which are also recorder automatically by the system. The online order placed by the customer is then delivered to him through home delivery. This online retailing program proved out to be more effective as it eliminated all the problems associated with the orders through telephone calls.
Thus, the company started developing and innovating its websites efficiently and effectively which has further allowed the company to grow and to expand its operations efficiently and effectively. Hence, this had also allowed the company to compete strongly in the entire market.

Furthermore, most of the gigantic retail stores are shifting their business models towards online retailing as it gives more convenience to the customers as well as it has an immense potential to allow the company to pursue a rapid growth. (Ladhari, 2010)

The top management of the company has implemented EBSM in its operations in the following manner………………………..