Information about the Company

David Jones Limited is one of the leading retailers in the up-market comprising of the Australian Department Store Chain. The financial results of the company are reported by two segments by which the company has been divided. The most important products of the company include white goods, CDs, DVDs, shoes, menswear, home wares, gift registry, toys and children’s wear, hampers, home office, consumer electronics, luggage, interior decorating, flowers, furniture, books and many other products.

The company has always provided its customer with the best of services and products with its outstanding range of products. The customers tend to get a wonderful shopping experience, be it social commerce site, mobile applications, online websites and even the sales through the stores. The other segment of the company which is the financial services segment provides its customers with David Jones store credit card, home loans, insurance cards and that too in alliance with the American Express.

The proportion of annual earnings that is derived through the store cards of the company stands at around 30%. In order to become the most dominant player in the Omni channel retailer industry, the company has emphasized to build its strength over manpower, realignment of the processes, integrating the systems and investing in the necessary scalable infrastructure. The Black and White blog by David Jones has also been launched by the company. In order to do a high level of blogging the blogging team has been formed by the mixture of Inside Out magazines, GQ and vogue.

In the year 1995, the company had become listed over the Australian Stock Exchange. Since, then the company has attracted huge capital and had grown rapidly. The company operates around 2 warehouse outlets and 35 departmental stores throughout Australia.

The GDP growth rate of the company has been around 2.3% since 2011, according to the Australian Bureau of Statistics. Because of the economic crisis that was experienced by the companies in the year 2011, the cash rate that had been set by the reserve bank of Australia had fallen by around 50 basis points, till 2013. However, as announced by the reserve bank of Australia in the year 2013, the inflation rate of the country is relatively low. The inflation rate for the country stands at around 1.6%. The exchange rate does not has shown any obvious changes. In the year 2012, the export of the services and goods had risen by around 0.8%.

According to the latest credit analysis of the economy, Moody’s has predicted that the economy of the country would be growing at a rate of around 2.6% to 3% per year over the next 5 years of the country. The main expansion of the country is going to be driver by the households of the country. Further, it was also noted by the agency that the short term growth would be experienced by the domestic consumption rather than the resource investments and the exports.

The prices of the houses in Australia haven been rising and the people of Australia have been highly resilient in order to pay down and reduce the burden of the debt and also in the face of the rising unemployment that is much high in the country. Further, the credit is becoming cheap in Australia and the country has been experience earnings growth.

However, on the other hand, the agencies that provide the ratings to the country are looking at the rising housing prices as one of the most significant factors which is contributing hugely towards the overheating of the Australian real estate market. Moody’s have warned the government of the country that as the monetary policy of the country is set to remain stable for the near future and there is going to be a huge influx of the foreign capital then as a result of this the real estate or the housing market in the country is going to caught up and eventually face a correction. 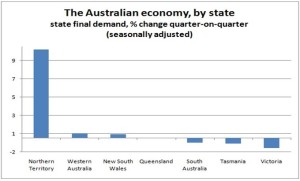 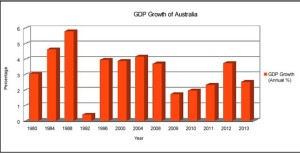 The economic freedom score of Australia stands at around 81.4. This gives the ranking to the Australian economy of number 4 in the freest economy in the latest 2015 index. This score is around 0.6 points lower as compared to the 2014 score. Australia is ranked on number 4 out of the total 42 countries in the Asian Pacific region. The economic resilience and economic dynamics has been strongly promoted in the country through the country’s strong commitment to the economic freedom. In many of the 20 economy freedoms the economy of Australia has been performing remarkably…….

The Bancroft Family and the Battle for Dow Jones: Never Sell Grandpa’s Paper