Emma Mcilroy, the CEO and her team weighed the advantages of the two distinctive business models, as they were ready for the funding pitch to scale Wild-fang – one of the leading and valuable menswear inspired fashion brand, which was built around the badass tomboy image. It was founded in 2012 by Julia Parsley, Taralyn Thuot and Emma Mcilroy, who were previously employed at Nike. By 2015, the company was generating more than 2 million dollars on an annual basis, and was growing at the rate of 250 percent year-over-year. The funding pitch tends to hinge on the process and resource’s gaps. The company would be required to address these issues in its business model, coupled with the results of CLV analysis.

One of the biggest concerns of the company is how to scale the business, regarding which it was presented with two approaches, including: brick and clicks approach private label retail strategy and multisided platform, which have the potential to link the products/ services of other brands to the Wild-fang community. Hence, the decision became a considerable challenge for the company, as the founders pondered on whether to take the company in the different direction or not.  (Mathwick, 2015) 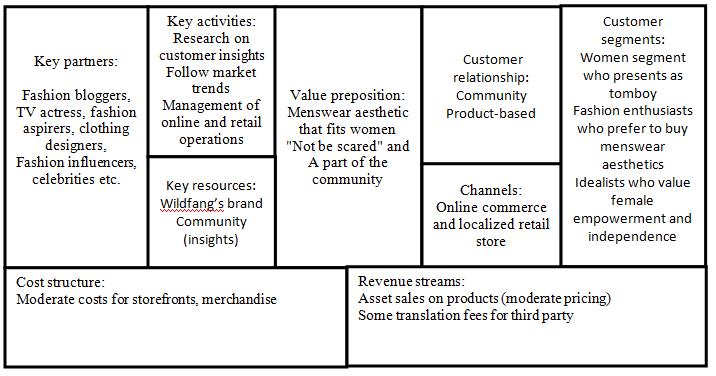 2. What are the functional, emotional, and social needs of WF’s customers? (use Christensen reading)

The fundamental and emotional needs of customers were same at some point, as Wild-fang

emotions, like they have this emotion of managing the closet for their men, and Wild-fang used these emotions to market its brand, which we we can explain from the explanation of Mcilroy: “the difference between creating a brand versus a product or service is that a brand creates an emotional connection. It is just simply easier to do that through visuals. We had the evidence of that when within 30 days of posting the launch video; 22,000 women had signed up to be on the mailing list, a month in front of product’s availability.” It depicts that how an emotional connection leads them to generate 22000 signups from women. As their main target was women as it is universal that women tend to be have much stronger emotional connection. These emotions are like touch-points, which the company has been utilizing to hunt its customer market.

Now, if we talk about the social needs of Wildfang’scustomers;young females were their target customers, and they are the generation that uses the social media most than any other age group.Young females mostly use products that are promoted by a most followed celebrity on social media. We can conclude this from the statement of Miclroy “When we looked at these girls’ social media accounts, we saw that many of them were following the same people–Gaga, Tegan and Sarah, Alexa Chung, vice. Not only was there a market looking for a menswear-inspired product, but there was also a shared attitude, persona and tone of voice that resonated with these girls.”  Customers’ social need sear to meet the social status……………………..