From the market survey, it indicates that many people with different backgrounds and ages were interested according to their perception of enjoyment and extra facilities in the night. The overall market of night ski was approximately 71% in favor of yes.

While the current situation of Blue resort indicated that the ratio of potential night ski participants were 55% in favor of no. Which shows that the overall assessment was not enough for the Blue Mountain resort to diversify the production of night ski.

However, the demographics show positive response in favor of the resort in which between 18-34 years of age were in favored of night ski. The overall resort analysis shows that some selected areas could be considered as the best option for Blue Mountain and which was subject to production in artificial snow plant.

The average rate of participants according to the forecasted result of the resort would be 20% on a regular basis and approximately 9.05% on a seasonal basis. Blue Mountain also analyzed the time spending days of the participants in this sports activities which were between 1-5 days in the majority and somehow 5-10 for a longer stay.

The desired night ski for the resort could be Friday and Saturday according to the historical days of ski sports, and the average drive distance would be 35-75 miles analyzed by Blue Mountain resort. However, many people according to the survey want to spend the whole day including the night for two or more days, and the results were estimated to be 55.6% in favor of the resort.

The desired hours for spending in the ski sport were estimated to be from 6 pm or in most cases were 7 pm according to the market report of Blue Mountain and the finishing time would between 10-11 pm. However, the overall results show that Blue Mountain has an opportunity to focus on the demand of the people, who would extremely engage in the sports activities and try to produce accurate results in order to benefits from the desired project.

It is concluded that Blue Mountain still faced some issues to introduce the night ski facilities to its participants. The barriers included different results from the market analysis which shows that the current scenario was not favorable to add the night ski because people were still favored for day ski and not spend such time in the night according to the natural seasonal variations. So in order best practice the strategy, some modification has been required to implement in a proper way.

First, the resort should conduct the external issues of the night ski because the mountain can be dangerous to produce injuries in the evening than collect the data from the skiers for the analysis of night hazards.

Secondly, the Blue Mountain should entirely focus on the younger age because they are exited for the new innovative facilities and attract to practice more according to the given situation. This can lead to attracting many other classes of people because they will know the awareness of the night ski by the younger people.

Finally before analyzing the market survey, a critical assessment of cost should take place in order to know the current and future demand of the proposed project. This particular plan should follow the company in order to achieve its results for the future benefit. 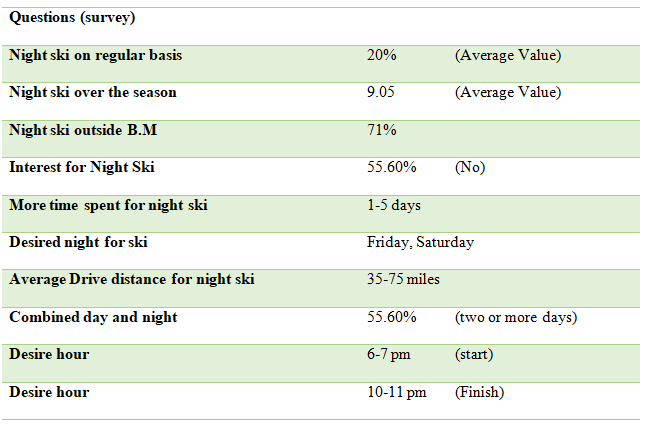