Ash-mark was a Tier 1 company and it supplied engine components in the market,whereas Red star was Tier 2 Company and the supplier of Ash-mark. However, the Red Star was facing complex situation and been bankrupt due to which Ash-mark had faced pressure as it totally depended on the single supplier firm. The customer of Ash-mark (OEMs), which was originally the equipment manufacturer became concerned about the performance of Ash-mark which also contributed to face pressure and complexities. However, the company had taken several measures and strategies in order to sustain its position. Further, the recommendations have also been given to the company to cope up from the current circumstances.

Ash-mark was a supplier of complex, emission and safety-critical engine component and had built a reputation in the market for having high quality and high technology solutions. Ash-mark had accounted global sales of several billion dollars. Ash-mark was major Tier 1 automotive supplier in the industry. It had provided engine and machine to several well-known OEM customers. The company had a profitable business with a large growing market and acquired a greater market share. Ash-mark increased its efficiency standards with a large global market production facility. Many major OEMs were dependent on the Tier 1 firms such as Ash-mark due to its technical proficiency and efficient manufacturing capabilities. In addition, the OEMs also depended on Tier 1 firms to run the Tier 11 and Tier 111 supply base.

Red Tier was a foundry used a traditional casting process but had changed to sinister-looking machinery to speed production process. Red Star’s workers transported a large amount of the molten aluminum by hand in large ladles which had created a dangerous, hot and dusty environment for the workers. On the other hand, Red Star owned the molding machines, conveyors and other tools and equipment’s, whereas Ash-mark owned the tooling which comprises of the molds and core patterns for each specific part.

Red Star was providing quality products at reasonable and competitive prices to Ash-mark for long ago. It had established effective operating practices and expanded its capabilities and resources to better serve the needs of Ash-mark. Red Star had expanded its business for finishing machining in order to provide complete parts-instead of only making castings, which also enabled Ash-mark to stop its in-house finish machining. In addition, this also facilitated Ash-mark to give its focus on higher-value-added machining, design and assembly while leaving the less value added part of its business.Moreover, prior to Red Star’s bankruptcy, Ash- mark had sourced few of its higher volume products from the other suppliers located in the low cost countries, which left Red Star with higher unit of lower volume products.

2.What were the key issues with Red Star, Ash-mark and their relationship that led to this situation?

Til- den,the new supply chain manager at Ash-mark, was shocked due to the poor-sales of the company that were less than $10 million per year, which were far less than he expected. Red Start had supplied more than 75% components for Ash-mark’s products and consequently 90% of the Red Star businesses were represented by Ash- mark. Red Star had competitive prices as compared to local and global competitors due to which Ash-mark didn’t want Red Star to increase its prices. Despite this, the previous supply chain manager had negotiated with Red Star to further decrease the prices which could help him to achieve the cost reduction goal. This decrease in the prices had contributed to create a complex situation for Red Star hence increased the financial pressure.

Louden, the owner of Red Star, had fired 18 accountants before declaring bankruptcy. Red Star had faced a difficult situation and had months of unpaid invoices which came out later by the time Til- den joined Ash-mark. Furthermore, Red Star as a private firm didn’t give any sign nor an indication of bankruptcy which made it tricky for Ash-mark and other OEMs to recognize the problem. Some banks also granted a loan of several billion dollars to Red Star for the purpose to support its operation and to enable Red Star to expand its building and install more finish machining capacity. The customers of Red Star started to rely on the new suppliers and six months before the bankruptcy, all the customers of Red Star had withdrew their tools and stopped their business with the firm.When Tilden stretchmarks, Red Star-demanded to increase the prices up to 15% in order to precede deliveries. However, Ash-mark had increased the support of Red Star. Ash-mark had sent a team of maintenance technicians to Red Star for the purpose to work on the site and to keep the foundry operating.

In addition, Ash-mark also provided financial support to Red Star by lending money each week.Therefore, thisgave Red Star some hope and support to continue its operations by covering aluminum purchases and payroll but ultimately creditors seized the accounts after the Ashmark had wired the weekly operating funds. Therefore, after the seizure, Ashmark pushed Red Star to go on the chapter 11 bankruptcy in order to have the time to stabilize the company. In the meantime, Ashmark’s tooling was cataloged and stored off site and decided to get the higher volume parts from other suppliers in Mexico and to the tooling was moved to another domestic foundry.

Furthermore, Louden had made a proposal which required Ash-mark to provide a million dollars loan to the company in order to pay off its immediate debts, and would agree to accept the 30% increase in the prices. In addition, the proposal also required Ash-mark to bring all the new business to the Red Star for the duration of contract. On the other hand, Tilden was concerned about the current situation of Red Star and had no confidence on the Red Star business profitability. Moreover, he was less confident about Lou -den and expected that he could not able to manage the new firm efficiently.Therefore, Tilden had rejected Lounden’s proposal and due to this, a complex relationship had emerged between the firms and became difficult for both the firms to work together. However, Tilden suggested Red Star to plan for and organized shutdown end of the following month in which Ash-mark would help Red Star. The organized shutdown would help Red Star to find other buyers and investors and would also allow Red Star to reduce its inventory of unfinished castings.In addition, Tilden also offered hiring Louden for at least 90 days after the shutdown. However, Louden had rejected all the proposals of Tilden and told Ash-mark that it should close its door. 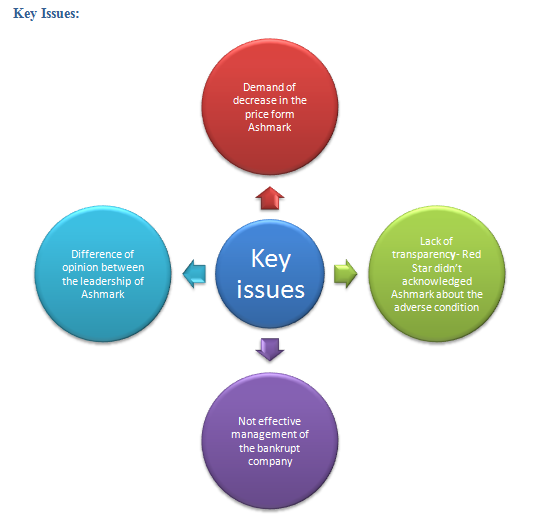