In Taiwan, the buildings follow a vertical zoning method. The country compromises of high-rise buildings that can accommodate offices, stores, apartments, service centers, convenience stores and they even accommodate workshops. The floors in the building allow the existence of several businesses in a single building due to the vertical zoning. The advantage that is received by this is that there would always be a high number of people entering or exiting the buildings due to diverse offerings in the same building. Even if the traffic has entered the building for making their purchase from any other franchise or outlet, there is always a possibility of them entering in to another store that is located above or below.

In addition to this, the flow of customers in Taiwan never ends, as people are always out there reg 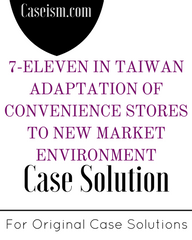 The growth of the convenience store industry also has positive effects from the consumer traits that were embedded in the Taiwanese people. The people in Taiwan are obsessed with immediacy and have a strong urge to get their hands on the latest of equipments as soon as possible. Taiwanese lack the trait of waiting. These traits of the Taiwanese people were efficiently identified by the store owners; they designed their flow of products in the convenience stores according to the urgency of need shown by the consumer market in the country. Entrepreneurs immediately had their attention towards this characteristic and tailored effective business models around quick franchising.

A number of street vendors exist in Taiwan. These vendors have been providing Taiwanese market with tasty and cheap food. Vendors lack the element of hygiene in their provided food offerings. Family managed businesses have been thriving in the market due to the abundant flow of people in the streets of Taiwan. This has provided an ideal situation to the convenience stores as they can efficiently increase their sales by providing the community with low-cost, tasty and hygienic food to the consumers in the market. Convenience stores have the opportunity on capitalizing higher sales by acting as a niche provider for quality food at the same prices.

Taiwan has efficiently created an ideal environment for the convenience stores. It has the highest density of convenience stores in the world. A total of 9,410 stores were already located in the territory by May 2010. Abundant number of stores allowed a possible increase in their sales supported by their existence at an average distance of 6-minute walk from each store. All these stores were efficiently catering to the needs of the different communities residing in Taiwan. Each store served a community of around 2,500 people. The partition of these existing stores can be done through company owned nature and allotting of franchises to the local owners, as the company owned stores accounted for 14.3% and franchise stores were evaluated to be 85.7 of the total.

These factors have adequately helped the industry to grow as these conditions are ideal and they also suit the nature of the business. In Taiwan not only the local convenience store owners are generating high levels of sales, but international major retailers are also able to grasp an ample amount of market share. The entrance of the global retailers in the market has increased the intensity of the competition, which again leads towards high competition with respect to the pricing of the products and goods.

Convenience stores in Taiwan are generating large amounts of revenues by making adequate sales to the consumers. The industry also plays a positive role in the betterment of the economic conditions of the country as it handsomely contributes large amounts to gross domestic product (GDP) standings of the company. The standings of the industry with respect to their net value are astonishingly growing with every passing day. A number of factors have helped the industry to grow and sustain their growth. The identified success factors that are contributing to the growth of the industry are listed as follows…………

A Strait of Uncertainty: Taiwan’s Development in the Shadow of China